Blink Book Review #10: “The Splendid Beauty … A Dog and His People” by Rick Bragg

A young friend recently asked me to choose my favorite dog book. I had to think really hard on that one. I’ve read a whole lot of them. I believe in the power of a dog. And there’s a special place in the writer universe for writers who can script a good dog story – whether it’s through poetry, fiction, personal essay, photo captions or a good dog obit.

At the time I got this question, I was in the middle of “The Splendid Beauty … A Dog and His People” by Rick Bragg. “All Over but the Shoutin’” was Rick’s first book that pulled me into his writing. I’ve long admired his spot-on southern-isms that completely avoid the “fingers on the chalkboard” of writers who try to fake knowing the real south and how it sounds, feels, smells and tastes.

In this book, Rick tells the stories of Speck, a bad-boy mixed breed (or mutt as he would have been called before that term lost favor). Sixteen essays lay out various episodes of Speck’s egregious behavior woven in with stories of Rick’s sideways love for this wild creature. This passage foretells the whole concept of the book: 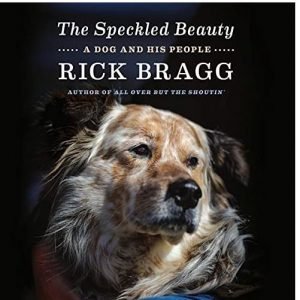 “In his first two months here, he was incarcerated twenty-nine times. Telling him to behave, even after almost two years now, is like telling him it is Tuesday.”

In one paragraph, Rick would have me crying. The next had me laughing out loud. And there’s lot of talk of food – both the human and canine kind (sometimes they are the same). Speck gets factored into the count for Thanksgiving dinner and has a Christmas list that includes cocktail weenies, sliced ham and a dog bed (which Rick kind of counts as edible since Speck ate the last two he had).

If you’ve ever had a dog that wasn’t perfect, you’ll recognize many of Rick’s perfectly told stories.

This little dog book ranks high up there with four others that have fed my soul, tickled my funny bone and brought me to tears. Part of why I love to read is to learn how to be the kind of writer of stories I’d want to read. Rick’s recent book and these other four dog books all taught me something about dogs and about writing.

“Dog Medicine” by Julia Barton. At first, this book seemed to be the story of the author’s struggle with depression. My interest waned a bit at first…I wanted to read about Bunker, the dog. But it didn’t take many more pages to understand that, while depression is certainly a major player in the book, it is by no means is it the main character. The real story here is about resilience, acceptance, trust, connection and belief in something bigger. And all of that comes alive through Bunker and how he leads the author through her depression.

“A Year of Dogs” by Vince Musi. This one feeds my need for visual tickling and great writing. Vince’s stories in this book reflect his canine subjects’ personalities and quirky habits with a humor that can only come from his lively imagination plus his willingness to let dogs just be dogs. The narratives that accompany each pup’s unique photo range from sentimental to side splitting. Even if you think you can’t abide a dog, Vince’s book leaves you with that feeling of having just been loved on by a gentle Great Dane with a really long tongue.

“Dog Songs” by Mary Oliver. While I’m not a big poetry reader, Mary Oliver’s collection of poetry is probably the only book on my nightstand that never gathers dust because I pick it up so frequently to just read a poem. You can read these poems as either her musings on daily life with her beloved canines or deeper reflections on the role of our connections with dogs in enriching our existence on this earth.

The Last Will and Testament of Very Distinguished Dog by Eugene O’Neill. I discovered this little gem when it fell off the shelf and landed on my foot during a visit to KramerBooks in DC. It was just weeks after my beloved Golden had died, and it brought me great comfort. It’s a moving and humorous last will and testament of the playwright’s beloved dog reminding him that every dog we own expands our hearts to make room to love another.

Reba Hull Campbell is president of the Medway Group, a big word nerd and avid summertime reader. This is part of her summer reading discipline to get off the screen and back to books in a dozen or so “Blink Book Reviews.” She’s challenging herself to keep them to 300-ish words so readers can skim them in a couple of blinks. Reach Reba at reba@themedwaygroup.com. Read previous reviews at Random Connect Points.

This content is being shared through the S.C. News Exchange and is for use in SCPA member publications. Please use appropriate bylines and credit lines.