Blink Book Review #12: In the Shadow of the White House by Jo Haldeman

The 50th anniversary of Watergate this summer struck a real chord with me bringing back snippets of news stories from the summer I was eleven and heading into the sixth grade.

An NPR podcast got me curious to dig a little deeper into that dark time in our nation’s history where trust in government was at a low point (sound familiar?). After reading news stories, listening to several podcasts, and browsing through a number of books on the subject, I settled on reading a memoir by Jo Haldeman, the wife of Nixon’s chief 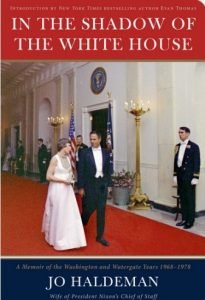 of staff, H.R. Haldeman. She wrote the book in 2017 when she was 88 to make sure her grandchildren understood their grandfather’s role in history.

Jo Haldeman was a devoted California housewife, stay-at-home mom of four children and LA native in 1968 when her husband, Bob, was picked to be Richard Nixon’s chief of staff. Jo embraced the family’s move to DC and her role as the wife of a senior White House official, tending the home fires by day and accompanying her husband to ritzy black tie events at night.

This book is her story of how Bob, a former advertising executive from California, ended up at the center of one of the nation’s biggest scandals and how his demise impacted not only the nation, but also – and more importantly — his family. It also gives some human insight into some of the eccentricities of President Nixon and the foibles of his administration.

What drew me in the most about this book is how Jo chronicles the transformation of her gentle-spoken family-focused husband into a chronic workaholic who claimed, even after his conviction, that he knew nothing of the Watergate break-in. This is not a hard-hitting political tome exposing the underbelly of the Nixon administration. Rather it’s one person’s perspective on a piece of our nation’s history that I remember just enough of to want to know more. Next on my list is revisiting “All the President’s Men” that I last read for a journalism school assignment in college.

Knowing what’s happening around us in national politics right now, this book reminded me of the old saying that “those who don’t remember history will be doomed to repeat it” is frighteningly true.

Reba Hull Campbell is president of the Medway Group, a big word nerd and avid summertime reader. This is part of her summer reading discipline to get off the screen and back to books in a dozen or so “Blink Book Reviews.” She’s challenging herself to keep them to 300-ish words so readers can skim them in a couple of blinks. Reach Reba at reba@themedwaygroup.com. Read previous reviews at Random Connect Points.

This content is being shared through the S.C. News Exchange and is for use in SCPA member publications. Please use appropriate bylines and credit lines.